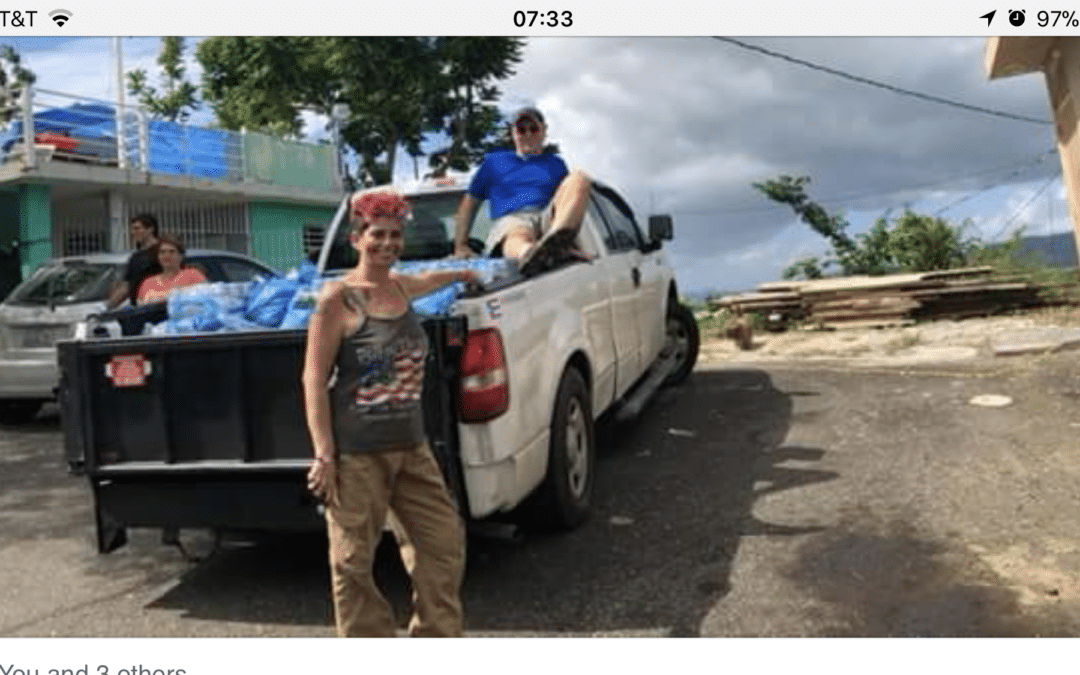 I recently spent some time in Puerto Rico to see and understand the relief effort and associated challenges. One day was spent with a non-government organization (NGO) taking supplies to people in the countryside. My translator Joey proved to be invaluable since few people speak English outside the major cities. Being Puerto Rican, Joey also easily connected with people we met along the way and removed any barriers to me obviously being out of place.

We started our day looking for Dee Smalling, our contact that was in charge of a Disaster Relief group and had gave us the option of joining them for the day. We met at a Warehouse in Carolina to get different supplies: water, food, and other things people might need like diapers and dog food. After loading the trucks, we set out to Gurabo. We visited the “barrios” of Mamey 1 and 2, where we helped deliver food and water as well as talk to the local residents.

The first group we interviewed where a small family of three (a woman, her child and her mother), and a neighbor. They were telling us how they had to go down to the grocery store to get water and food every two or three days since they don’t have electricity to keep groceries refrigerated. They mentioned they had gotten some help from FEMA and other groups at first but not any more. The property they live in had two stories, the top one, where her daughter lived, had been wiped out so her daughter moved. They’re still waiting for it to get repaired. They plan on demolish completely it to make it back up. FEMA hasn’t paid them yet for that story, only for the first one which is getting filtrations through the second story. They also mentioned that the electric company has been doing some work around, so they hope to get electricity soon. They said that they had cellphone service and that they’re main concern was getting electricity back.
The second family we talked to was composed of two elderly people, one of them was a bit blind and the other was a bit “lost”. They lived with one of their sons. They were fine. They had received water but it came and went somedays. We didn’t get to talk much with them. They were grateful for the help.
The third person I interviewed was an old lady. We had just given her the supplies and water. She had really good attitude towards her situation. She told me her house didn’t withstand a lot of damage, which was good to hear. She said she had water and food. Her daughter lived by and she helped her a lot. She was hopeful to get electricity soon, she’s seen the power brigades working around her “barrio”. She was 81 years old, Neddy Gonzalez. She’s grateful to God to be alive and that she’s fine, so she wants God to help the people who are really in need.
The last person we spoked to, Juan Torres, told us about relief efforts. FEMA had brought them supplies, as well as a church group nearby. After a while, about two months ago, this help stopped coming in. He’s retired so he gets retirement money. However, he spoke to us about how prices has skyrocketed, groceries and gas. He has a small generator, but he still doesn’t buy groceries he can’t refrigerate. He spoke to us about having cell service, and that he’s not worried on communication since he can call whoever he needs.
This was a small recap of our first day around the island, especially in Gurabo, Puerto Rico.
-Joey.
Joseph Rivera, 2/9/2018